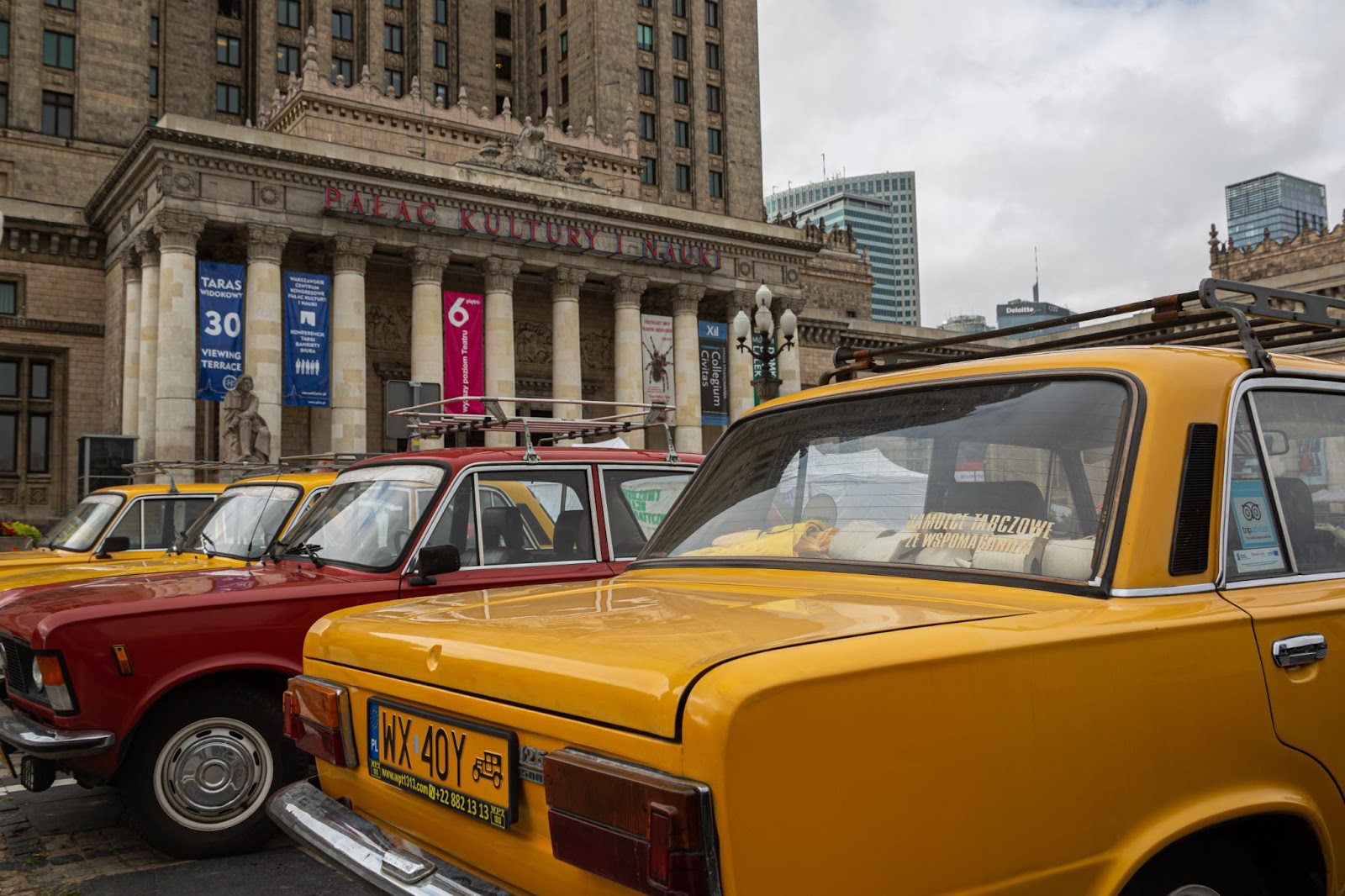 Eastern Europe is great for anyone who is looking for under-marketed countries with character for an affordable cost of living. Anyone who’s been to this part of the world knows it’s THE PLACE to be–especially for digital nomads and expats alike. And we’re happy to share with you everything you need to know about the best countries to live in Eastern Europe.

The top 3 best countries to live in Eastern Europe for digital nomads and travelers in 2022 are:

We have ranked them by taking into consideration the following aspects:

So let’s explore why we chose the aforementioned three countries as the best for residing in Eastern Europe.

Slovakia – a fairytale land of mountains and castles in Eastern Europe

As a mostly mountainous region that’s littered with fresh rivers, Slovakia is an enchanting place. With the greatest number of castles per capita, and the first reservation of folk architecture in the world, it truly has a lot to offer.

It is free to travel by train in Slovakia, thus budget travelers will save a lot on top of what they’re already saving as a result of Slovakia’s low cost of living.

The cost of living in Slovakia

Average monthly expenses in Slovakia, without the rent, are up to 700 euros for a single person. Depending on the city you choose to live in, rent will vary. For example, rent in Slovakia is on average 60% lower than in the United States.

In regards to rent in larger cities, a two-bedroom apartment can cost you close to 500 euros per month. This can of course vary depending on the location, size and condition of the apartment. However, rent prices began to skyrocket in 2022, so act fast if you want to grab a nice flat for an affordable price.

With monthly expenses of around 1200 euros per month, Slovakia is also the 7th cheapest country in the European Union–much cheaper than the other members. The majority of expenses are spent on food in markets and restaurants, with the rest going towards rent.

Markets and restaurants are also pretty affordable. Having a nice dinner in an inexpensive restaurant can be enjoyed for as low as 5 euros! Slovakia is a small country and its market may not have the variety of goods compared to those in bigger countries, but local delicacies easily  make up for that.

Internet in Slovakia’s cities, excluding rural areas, is pretty great as well. The cost of having a fast connection with limitless data is around 16 euros per month. For anybody relying on internet for their job, which is pretty much everyone at this point, it is advised to get a local sim card with some backup data.

Transportation in Slovakia is pretty straightforward

Buses are the most common way of getting around in Slovakia for intercity and local travel alike. Catching a bus is inexpensive for one way local travel as it costs 0.6 euros. It is also affordable to rent a car. This can be done by providing your driver’s license from your home country. However, it is always good to ask any rental company for additional requirements.

You can also explore the magical scenery of Slovakia by renting a bike. Many mountains, rivers, caves, folk architecture reserves and castles await you, and much of them can be reached by bike!

The best cities to live in Slovakia for expats

Bratislava – This is the capital of Slovakia. It’s located at the foot of the Little Carpathians, touching the shores of both th Danube and Morava rivers.

Kosice –  It is located in eastern Slovakia, on the Hornad river. It is a major cultural and historical draw for foreigners.

Levoca – A small town of 14,000 people, and a historical center of Slovakia.

Things to do and places to visit in Slovakia

Check out one of the nine national parks in the country. Spending time in the folk architecture reserve is another must!

Is there a digital nomad visa for Slovakia?

Slovakia is part of the European Union. It is also in the Schengen Zone, so a Schengen visa will grant you 90 days in the country as a tourist. Citizens of countries, such as the US or Canada, will be granted this visa upon arrival and clearing customs.

To apply for the visa, visit your local embassy, or do it online here!

After the 90 days, if there are no other visa options for you, you can extend your stay by doing a border run, obtaining an employment visa or enrolling in a course for a student visa.

The Climate in Slovakia

Slovakia’s weather can get down to -40º C in the winter, which is cold and humid.  In the summer, the difference is very big, reaching up to +40º C.

As Europe’s least crowded country, Estonia is guaranteed to give you the peace of mind you oh-so crave. It’s a perfect place for spa-addicts and individuals who simply want to live their best life, hustle free.

The Cost of living in Estonia

On average, monthly expenses in Estonia are around 700 euros per person, not including rent. To rent a one bedroom apartment in Estonia, around 600 euros is needed per month.

That comes out to 1300 euros per month per person as an average cost of living in Estonia.

You are never more than a 30 minutes drive away from a forest or a lake in Estonia. Each municipal unit has their own bus service, and buses are the most widely used means of transportation between cities.

The Best cities to live in Estonia

Tallinn – This capital is super digital nomad friendly. You will feel like part of the community in no time! Take a look at what nomadlist has written about it.

Tartu – This is the second largest city in Estonia. It is known for its prestigious 17th century university, neoclassical architecture and caffe-filled Town Hall Square.

Maardu – A municipality of some 15,000 people, it’s the largest port in Estonia.

Is there a digital nomad visa for Estonia?

Great news! As of 2020, foreigners can apply for an Estonia digital nomad visa, which allows them to work and live securely for a year.

How can you apply for a digital nomad visa in Estonia? Do the following:

Climate and weather conditions in Estonia

Estonia has four seasons of nearly equal length, and it’s typically windy throughout the year. This is a result of the humid atmosphere due to the proximity to the Baltic sea. Weather in Estonia is characterized by a mild summer and cold, windy winters.

In the summer months, temperature gets to 17º C in inland Estonia, and 16.3º C on the islands.

Another perk of Estonia is that it is environmentally very clean, relaxed and safe. According to the World Health Organization, Estonia has the best overall air quality in the entire world.

Did you know that Serbia is the birthplace of no less than 17 Roman emperors? With an abundant history, Serbia was a land of kings, emperors, tsars and the Ottomans throughout the ages. Each of the civilizations mixed with and contributed to the already rich culture.

This is reflected in the folklore, cuisine and architecture of Serbia.

The cost of living in Serbia

On average, it costs around 450 euros per month for a single person to live in Serbia without rent, which is up to 70% lower than in the United States!

So, how much is the monthly rent, which, by the way, is up to 70% lower than in the United States? Well, it depends on the city, location within the city, size and condition. Recently, the prices of apartments in Serbia have been increasing.

In the capital Belgrade, renting a flat can cost around 350 euros per month for a one bedroom or a studio. In Novi Sad, the second largest, the same size flat can be around 25 euros cheaper to rent.

This comes to a  total of around 800 euros per month for a person to live comfortably in Serbia.

The best cities to live in Serbia

Belgrade has the largest expat community. To this day, there are still remains of Roman and Ottoman architecture in the city as well. It also offers prominent brutalist and socialist architecture, along with a few succession and bauhaus style buildings. This makes walking around the city super fun.

There are a lot of expats from around the world in Belgrade. You can connect with them on Facebook groups or join several meetups and events organized throughout the year.

Novi Sad is located in Serbia’s Vojvodina region in the north, known as the Land of Dukes. Compared to hilly Belgrade, Novi Sad is flat and was crowned the European Capital of Culture 2022. The architecture is mostly influenced by the Austro-Hungarians. Gothic style cathedrals and wide streets are what give Novi Sad its beauty.

Also located there are a bevy of galeries, museums, concert venues and shops.

Many ethnic groups live in and around Novi Sad. The majority are Serbs, followed by Hungarians, Croats, Montenegrins, Russians and Ukrainians, among others.

Is there a digital nomad visa in Serbia?

There is no official digital nomad visa in Serbia yet, but there are ways to stay for longer periods in the country. Serbia is neither part of the EU, nor the Schengen area, so it’s not so hard to obtain short term visas or use other visa loopholes like school, visa or self-employment visas. You can also do a border run every 90 days or so.

Find out if you need a visa and what types of long term visas you can acquire here!

The climate and weather conditions in Serbia

Serbia has hot summers and cold winters with snow. All of the seasons can be enjoyable. One can experience splendid greenery in the springtime, lounging by the rivers in the summer and cozy ski retreats in the winter mountains.  Serbia is truly attractive all year round.

Need a remote job? We at Support Adventure are always hiring. So apply here to start your adventure in some of the best countries to live in Eastern Europe.

Vietnam opened its doors to international travelers only 10 years ago. Since then, this destination has been steadily growing in popularity among digital nomads, and so it’s no surprise that many want to stay long Read more…

Living in Tallinn as a Foreigner: What To Expect

Tallinn is one of Europe’s quintessential, classic capital cities with plenty of attractions and picturesque sights for wandering visitors. It is also one of the best digital nomad spots in Europe, offering a relatively low Read more…

The Top 5 Best Cities to Live in the Balkans

The Balkans, a slice of South Eastern Europe that borders the Adriatic sea to the west, and Mediterranean sea to the south, is home to medieval fortresses, magnificent mountains, amazing food and parties. Yes, it Read more…